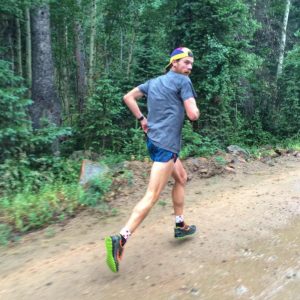 Originally from Connecticut, Pretak began running in 2000 when he (once again) failed to make the high school baseball team. His best friend dragged him out for cross country where he fell in love with running. The rest, as they say, is history.

“My college claim to fame was finishing dead last in the 3000m Steeplechase at the N.C.A.A. D2 Championships.”

After college Pretak continued to run, albeit sporadically. In 2010 he joined a U.S.A.T.F.-Connecticut club team and began running and racing consistently. After a two-year stop in California, Stephen found his way to Fort Collins where he came upon the Fort Collins trail running community and the Gnar Runner race series. While he still loves to race the roads, he’s since begun running and racing on the trails and has started to have some good success, most notably taking an already stout Black Squirrel Trail Half Marathon course record under 1:30 while winning in commanding fashion.

While Stephen has a growing appreciation for technical trail running and big climbs, he still enjoys hopping in a road race whether it’s a mile or half marathon. In 2016, he won the Fort Collins Mountain Avenue Mile outright in 4:24 and the men’s division of the Horsetooth Half Marathon (out-leaned for first overall by the incomparable Brianne Nelson).

Fun-loving Pretak found a corner of internet fame in 2016 when Runners World ran an article on his much-photoshopped 2015 Black Squirrel Half race picture.