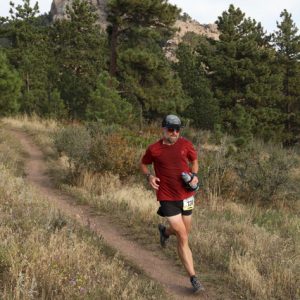 Growing up in Oklahoma, Brett was more interested in musical pursuits at a young age than he was athletic ones. Sometime around 2008, while living in Fayetteville, Arkansas, he came to the conclusion that if he didn’t get serious about his activity level and diet, he would eventually be another obesity-related health statistic. So, he bought a mountain bike and rode the many trails in the lovely Ozark mountains.

Brett and his family regularly spent time outdoors hiking and camping. On a family vacation to Colorado in the summer of 2009, he decided to give running a try. Going on that first 2-mile run at an altitude of 8,000 feet was a bit of a shock to the system! For the next few months, he “ran angry” – knowing that running was good for him, but not really enjoying it. Then one day on a 4-mile run, he experienced a runner’s high when it all seemed to click and suddenly running became the sport for him.

The Harkeys finally made their way to Colorado for good in 2010. Now 65 pounds lighter and with a solid year of running under his (shorter) belt, Brett was ready to tackle the trails around Fort Collins. After a couple of years of exploring on foot, his first ever marathon was the Blue Sky Trail Marathon in 2012, where he won his age group and placed 8th overall. A couple of years later he dove headfirst into the world of ultras with the Quad Rock 50. By 2016 he stepped up to the 100 mile distance, and in 2017 he competed the Gnar Slam. It’s safe to say that ultras are now in his blood. He will run or race any distance but is happiest when he gets to spend a long self-powered day exploring big mountains.

Brett is an example that anyone, no matter their level of fitness, can work to accomplish seemingly insurmountable goals – whether those are to lose weight and be healthy or to race 100 miles in rugged mountains. He loves the encouraging and challenging trail running community of Northern Colorado and looks forward to running and racing alongside others who are equally as passionate about the sport.