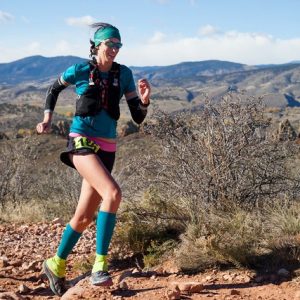 Elise renewed her love of running in 2014 when a friend introduced her to trail running. That same year, she signed up for the Black Squirrel Trail Half Marathon and instantly found her passion.

For her birthday in 2017, Elise decided to attempt her first 50 mile run; she had a blast and became hooked on ultras. While volunteering for the Never Summer 100km, she knew how much she would like to run it one day. Realizing that no woman had ever completed the Gnar Slam, she decided to accept the Gnar challenge of Never Summer and other Gnar races in 2017.

Looking back on 2017, Elise reminisces that it “has been a truly memorable year, spending numerous miles with many new friends on the trails and in the mountains I love.”

When she is not running on the trails with Maya, her Gnar pup, she works as a nurse educator.