It was a busy late summer & early fall for us here at Gnar HQ. From August 9 to October 15, we hosted a total of 10 races ranging in distance from 4km up to 50km. And we had a blast at each and every one of them.

Every race that we put on is a chance to witness folks doing extraordinary things and we never take it for granted. We love every story that we hear, and appreciate every finish we see. Thank you for being a part of it again this year.

So, to recap, here’s what we’ve been up to since the Never Summer 60km/100km in late July:

The Lory Summer Trail Series is one of our favorite events. Given the shorter distances (5k->12k), we see a range of abilities and experience levels. The races are a great introduction to trail running for folks trying it out for the first time, and also an awesome opportunity for more experienced runners looking to let loose, take some chances and run really fast.

We offer two “hilly” events and two “flatter” events across the series. Each race is followed by a chance to hang out over pizza and New Belgium beer until the sun goes down. We give out a few things to our faster runners with our awards, but the real emphasis is on running hard, having fun & hanging out. 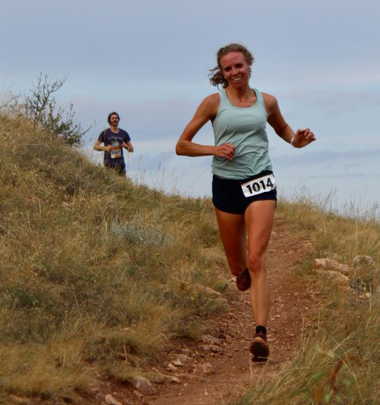 Our series podiums this year shook out as follows. 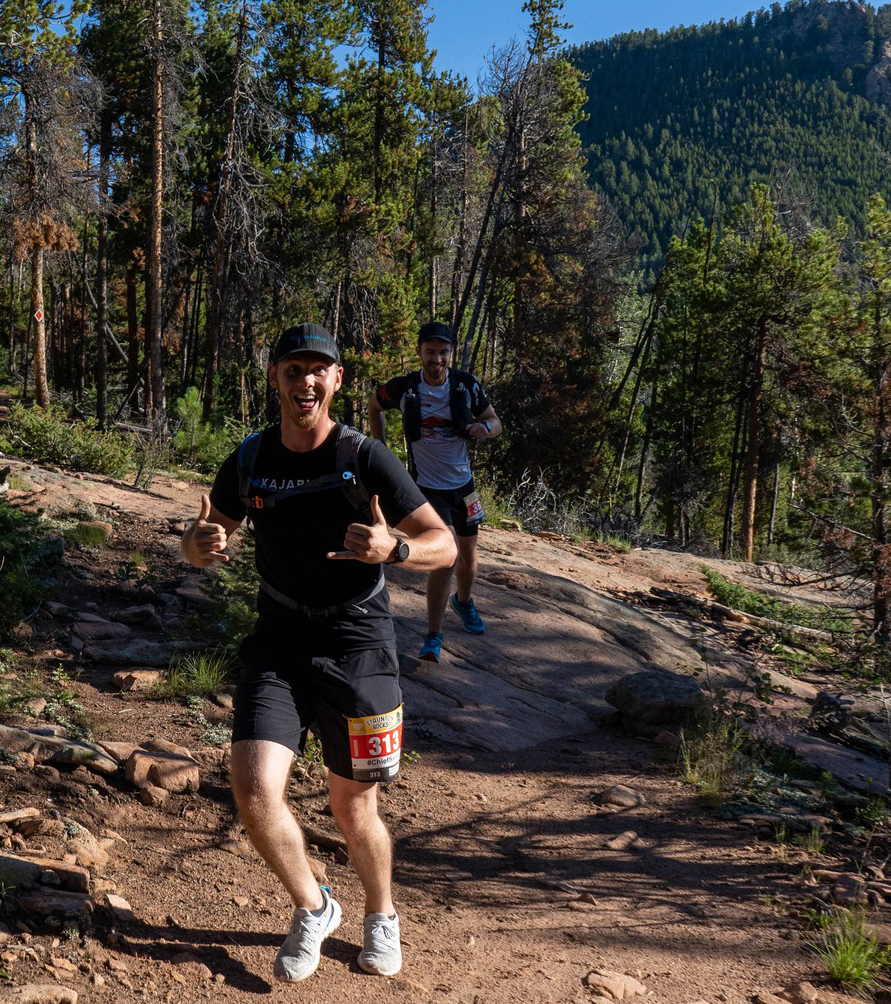 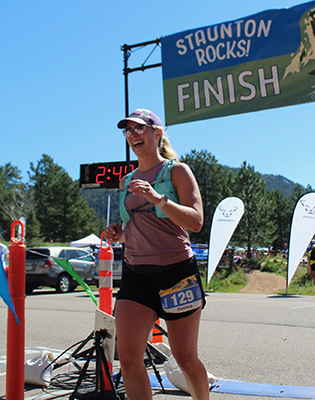 At the end of August, we adventured south and just a bit west to Staunton State Park in Pine for the second running of the Staunton Rocks! Marathon & Half Marathon.

Staunton State Park is a true gem of the Colorado State Park system and when you catch a beautiful weather day, as we did for the race, it is made that much more spectacular. Each of the distances showcase the great variety of trails in the park, punctuated by some technical rock gardens but generally characterized by a state of buttery flow. Running at Staunton State Park is a real joy!

And our 260 runners made the most of it. In the marathon Daniel Torres set a new overall course record (3:46:37), while a pair of octogenarians rounded out the half marathon fields with impressive finishes. Congratulations to our final two finishers, Bill Moyle (83) and Ross Westley (86) for their inspiring finishes. 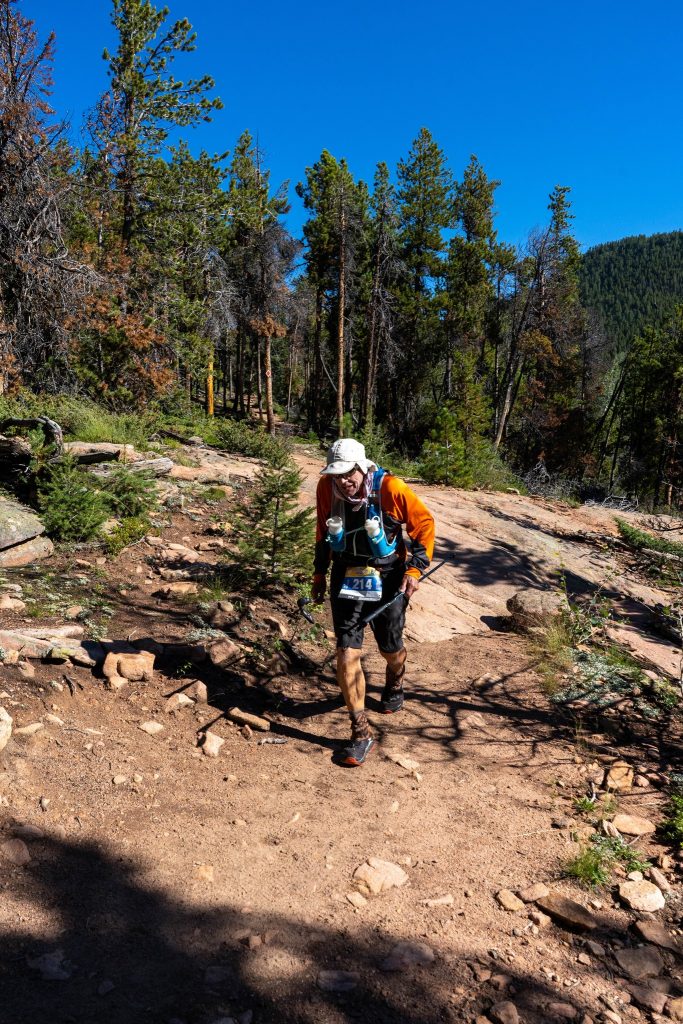 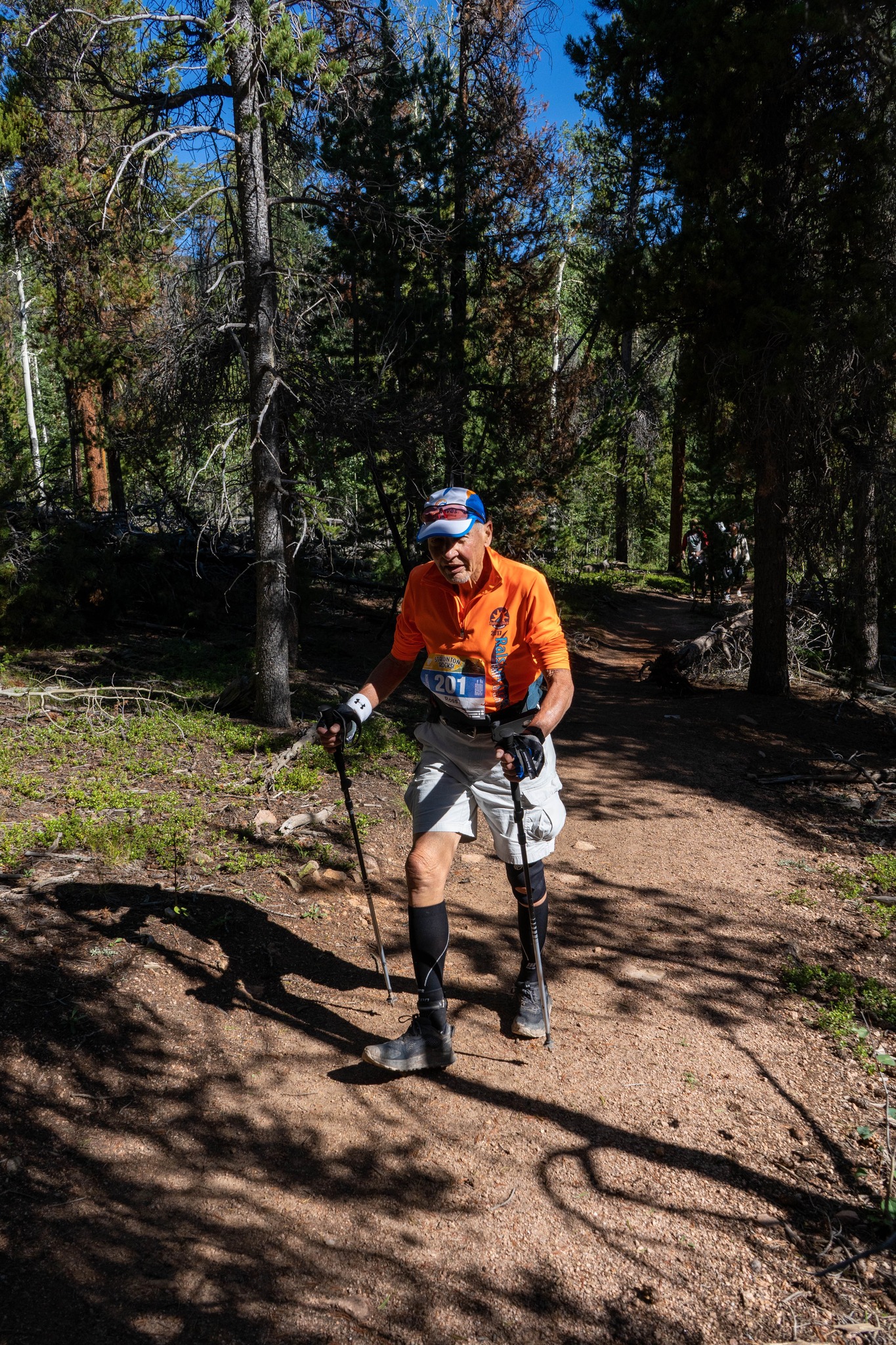 Historically a warm weather race, the tenth anniversary of the Black Squirrel Trail Half Marathon was welcomed by gray skies and cool temperatures. Running conditions were close to perfect with the exception of some late-stage mud on sections of the final valley miles.

Fast conditions led to fast times and Boulder-based coach David Roche was a man on a mission. Leading out a small pack over the first mile, David made his move as soon as he hit the 4 mile climb to the course high point at the top of the Timber Trail. His move went unmatched and speculation soon moved to whether or not he could best Stephen Pretak’s long-standing course record. And indeed he could, taking the record down by close to two minutes and beating second place Carson Hume by over 4 minutes. Carson’s time – for the record – would be the seventh fastest in race history.

If Roche was dominant, then fellow coach Sophie Anders was even more dominant in her victory in the women’s race. Sophie’s winning time (1:43:24) was the fifth best in race history and some 8 minutes quicker than Rachel Mow in second. 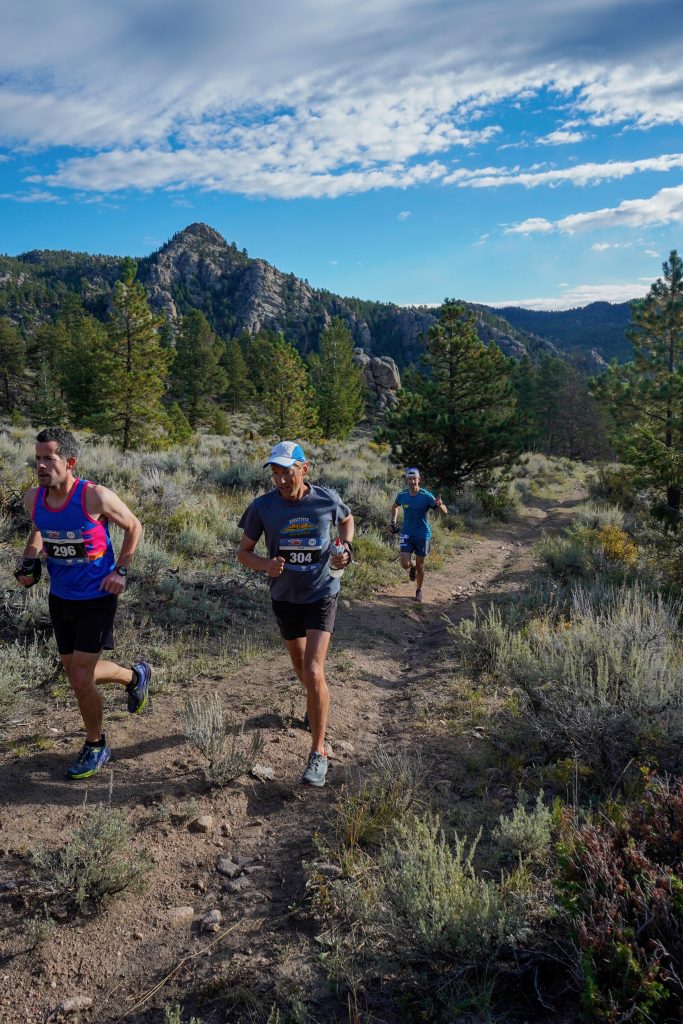 The Red Feather Lakes area of Northern Colorado offers beautiful scenery, diverse wildlife and fantastic trails. The geography in this corner of Colorado is quite unique and one that we were excited to show off at the inaugural running of the Red Feather Trail Jamboree.

The race featured two distances, designed to appeal to new and veteran trail runners alike and both staging from our host location at the Ben Delatour Boy Scout Ranch. Most of the half marathon takes place on the Elkhorn and Lady Moon Forest Service Trails, with a couple of dirt road access miles to and from the Boy Scout property. The 50km race shared the same trails as the half marathon with the addition of an opening 8 miles on the Boy Scout Trails and a northern loop on the Mount Margaret Trails. Both finished with a grueling – and much beloved – stair climb into the finish at the Coral Rock Dining Hall.

With plentiful camping options on site at the Boy Scout Ranch, much of the field chose to enjoy the pre-race meal, camp out Friday night and walk to the start Saturday morning. It’s a weekend getaway atmosphere we plan to build on for 2023.

Race day itself offered up beautiful morning sun with a passing shower or two in the afternoon.

We celebrate all our finishers from the very first to the very last, and it was wonderful to see families out celebrating the finishes of their loved ones, whether in the half marathon or the 50km. Many were celebrating a first ever trail race or first ever ultra.

At the front of the field we were excited to welcome Kris Tyson across the line first in the half marathon as our first ever Red Feather finisher. Kris is a member of the Gnar Racing Team and a frequent volunteer at our races. Another 153 finished after him and before Ross Westley, our final finisher of the half marathon race. As noted above, 86-year-old Ross was our final finisher at the Staunton Rocks! Half Marathon, and somebody we love to see on our start lines. He is on a mission to complete every half marathon in the state. As they pop up, he completes them.

And not to downplay other amazing accomplishments of regular Gnar volunteers & racers, it must be noted that our final finisher in the women’s half marathon race was 73-year-old Mary Gilbert. Mary ran her first Gnar race at the tender age of 61 and has been volunteering as long, if not longer. 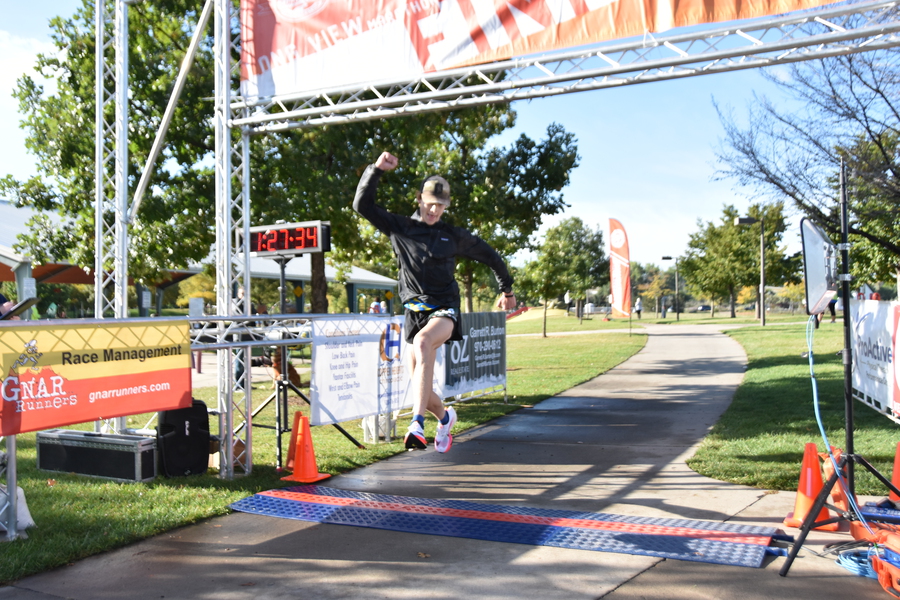 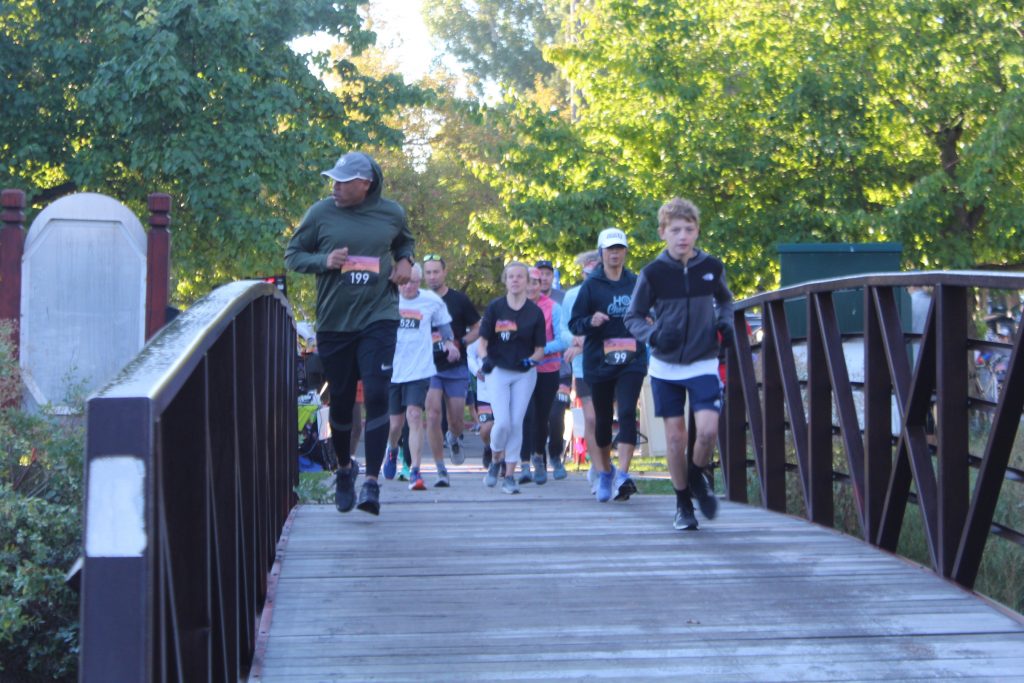 The Blue Sky Trail Marathon marks the end of our trail season. But before we get to the end of the trail season, we kick things off on the roads with the Long View Marathon & Half Marathon and the start of the Tortoise & Hare Series.

This year’s Long View Marathon saw an altered marathon course, beginning at Edora Park and using the Spring Creek Trail to join the route of the previous course at Spring Canyon Park at around mile 7. The course worked out really well this year and will become the permanent course moving forward. Our half marathon course stayed the same with its start in Fossil Creek Park, and terminus along with the marathon in Loveland at beautiful Fairgrounds Park.

Full results from the race are available here.

The weekend after Long View, we were stoked to be back on the Fort Collins bike path network kicking off the start of the 2022/23 Tortoise & Hare series. We have been managing this series on behalf of the Fort Collins Running Club for 15 years now and we love everything about it. The races are handicapped by previous T&H performances and invariably it is our slower runners who take home top honors. All are celebrated equally; we do it rain, snow or shine; and the focus is always on encouragement, community and having a good time.

If you haven’t checked out the many benefits of becoming a Fort Collins Running Club member, consider taking a look. Membership includes free entry into all seven T&H races, a $20 discount on the Horsetooth Half and all manner of other great perks including tons of local race discounts.

This year was the 15th running of the Blue Sky Trail Marathon and, as always, it marked the end of our trail racing season. Coming mid-fall, the weather can be highly unpredictable, but this year we came up trumps with a perfect mix of cool, calm air and sunshine. Yes please.

Just over 200 runners toed the line, including our class of 2022 Gnar Slammers. The Gnar Slam is a recognition we hand out to runners that complete the four original Gnar trail races: the Quad Rock 50, Never Summer 100km, Black Squirrel Half Marathon and the Blue Sky Marathon. Those that complete the series get a commemorative award plus free entry into the following year’s Quad Rock races.

In both the men’s and women’s races this year, we had runaway winners. Hannah Allgood (nee Osowski) went pillar to post and set a furious pace to win the women’s race in course record fashion (3:33:57), while finishing fourth in the overall standings. Attempting to match her in the men’s race was Black Squirrel Champion David Roche. And while it looked like David was also on pace for a new course record through the first half of the race, he ended up coming a couple minutes short in running the race’s third fastest time ever (3:11:14). 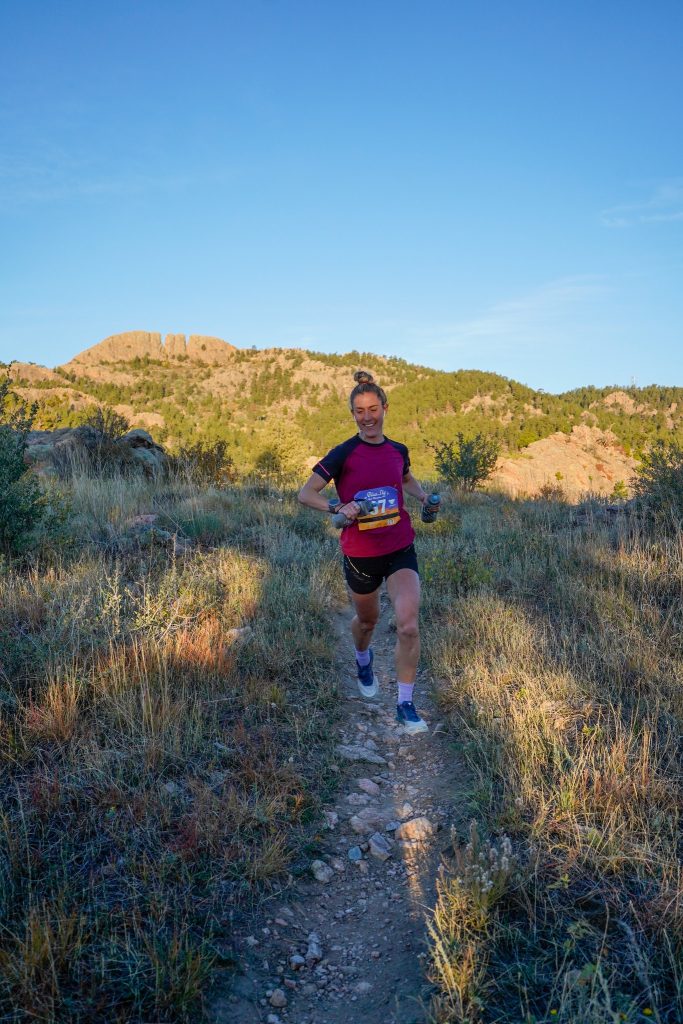 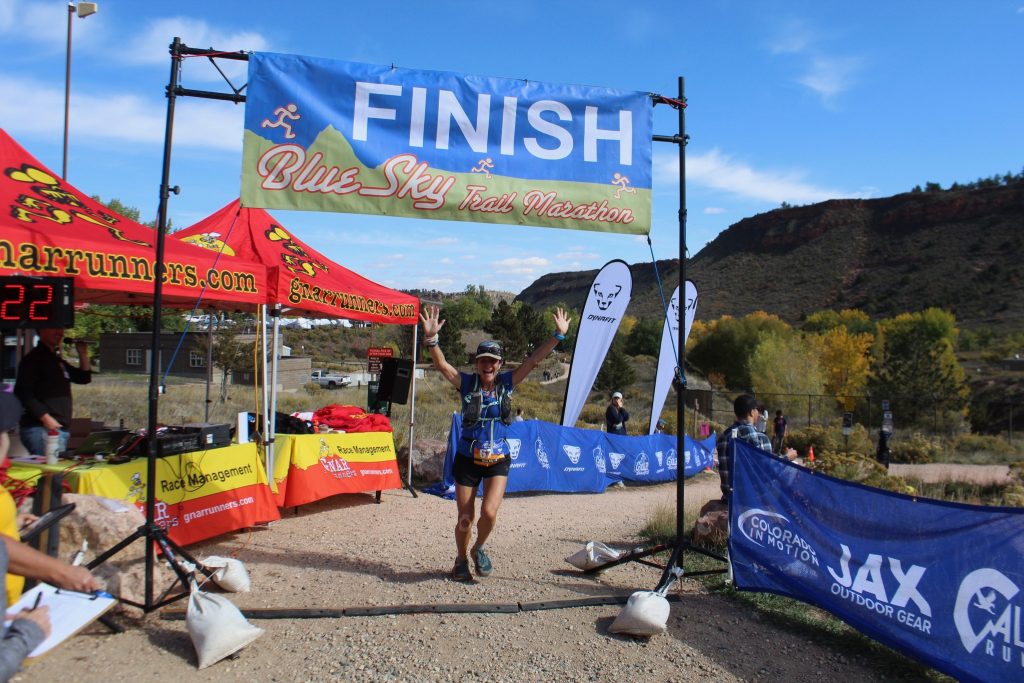 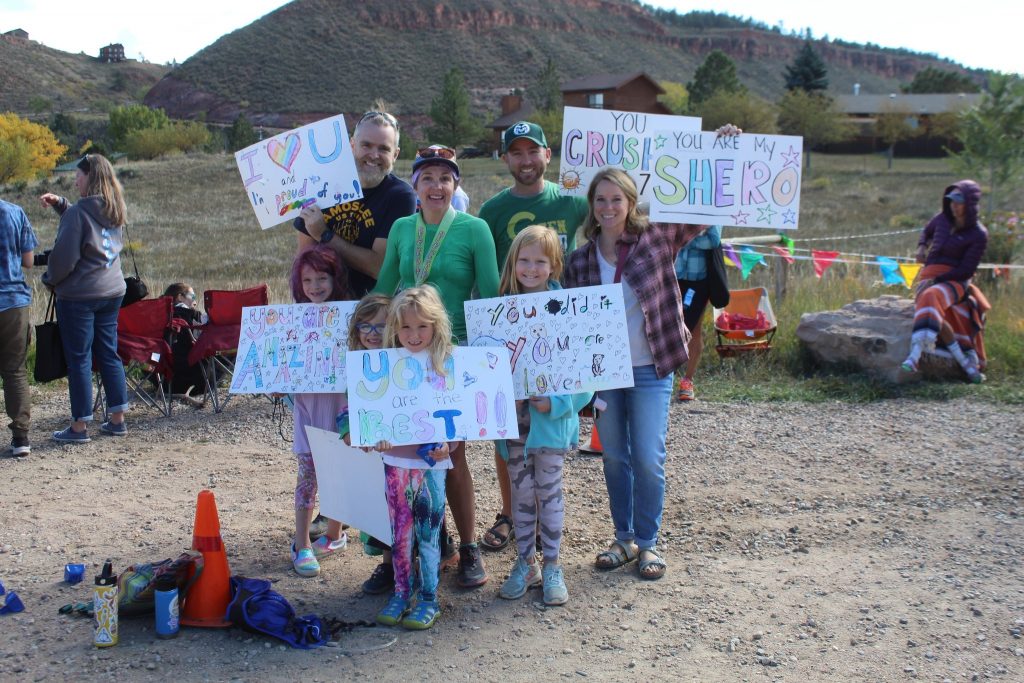 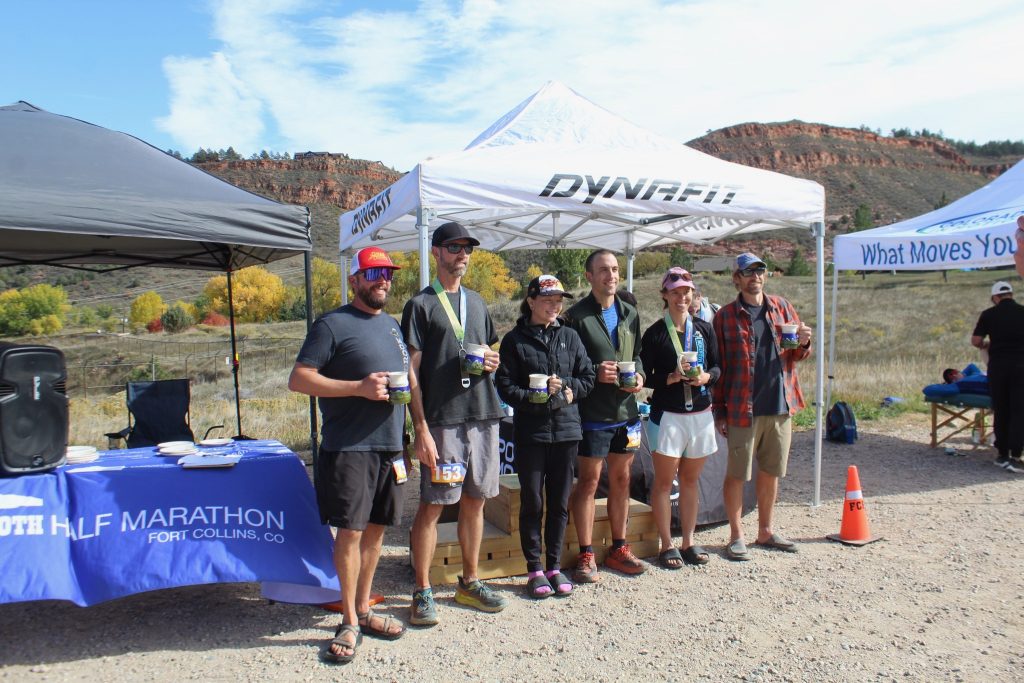