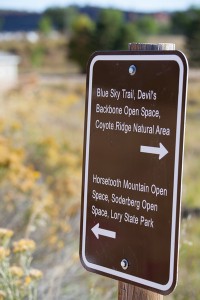 The weather for the seventh running of the Blue Sky Marathon lived up to the race’s name, with participants enjoying a perfect day for running. A total of 207 runners toed the line, with 196 crossing the finish line – an excellent finisher’s rate – but proving once again that the Blue Sky Marathon is a deceptively challenging course and a thoroughly honest test.

By popular demand, we maintained the short Herrington, Loggers and Carey Springs reroute near the top of the Towers climb, and will continue to do so for all future runnings of the race.

In the women’s race, two runners finished under Kaija Staley’s record from 2012 (3:57:39). Maria Petzold (Boulder) and Anita Ortiz (Eagle) finished just six seconds apart in an exciting finish to a very close race, with Sarah Hansen (Fort Collins) just four minutes back in third, and less than a minute behind the old course record. Maria, Anita and Sarah were 7th, 8th and 12th overall respectively. Maria’s new mark stands at 3:54:05. 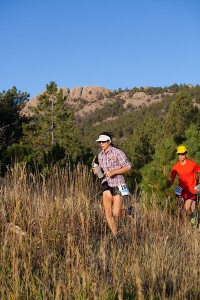 Maria Petzold on her way to a new course record.

In the men’s race, local favorite Nick Davis won in a time of 3:37:29, finally winning the race after two second place finishes in 2012 and 2013. Somewhat ironically, this was Nick’s slowest finish of his three Blue Sky Marathons. And that’s why we race ’em. Black Squirrel Half winner, Kory Skattum (Broomfield) was second, four minutes behind Nick, followed a minute later by long-time race leader Antonio Molina (Nederland).

We welcomed a good number of runners from out of state, many using the Blue Sky Marathon as their Colorado checkmark on their way to collecting a marathon finish in all 50 states. For many, this was their first trail marathon ever, so an extra special congratulations to all our finishers from out of state and from lower elevations. Our last two finishers, Leslie Stanfield (8:40, VA) and Kevin Brosi (8:42, TX) exemplified the race spirit, both finishing with big smiles. We hope to see all of you back again sometime in the not-too-distant future. 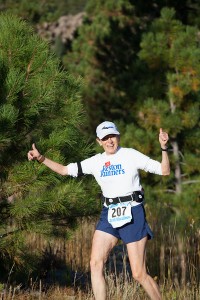 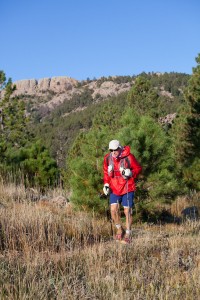 Our third-from-last finisher, Bill Moyle, also finished with a huge smile, being warmly welcomed home and clocking in as our oldest finisher ever at the tender age of 75.

And of course, our races could never have the fun atmosphere that we aspire to promote without the amazing support of our fantastic volunteers. As always, you guys were our biggest source of compliments and we simply could not do this without you. Thank you everyone – we consider ourselves extremely lucky to be part of such a supportive trail running community here in The Fort. 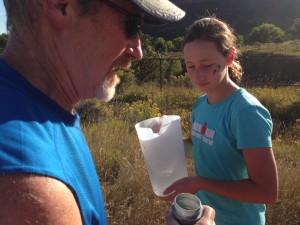 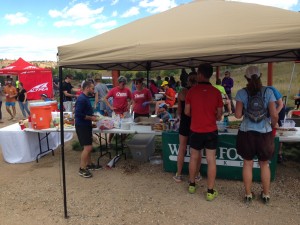 Prizes at the awards ceremony included Altra running shoes for our winners, gift certificates to Runners Roost Fort Collins, in addition to photo prints from our wonderful on-course photographer, Erin Bibeau. Erin’s gallery from the race can be viewed here, with digital downloads starting at just a dollar.

The Blue Sky Marathon marks the end of the season for us at Gnar Runners, but we are already looking forward to bigger and better things for 2015. If you enjoyed Blue Sky, consider running the 25 or 50 mile Quad Rock races in May, the Black Squirrel Half Marathon in September, or – our newest event – the Never Summer 100km (details soon) in late July.

Thank you all again for a wonderful season. See you in 2015!

This entry was posted in Blue Sky Marathon.